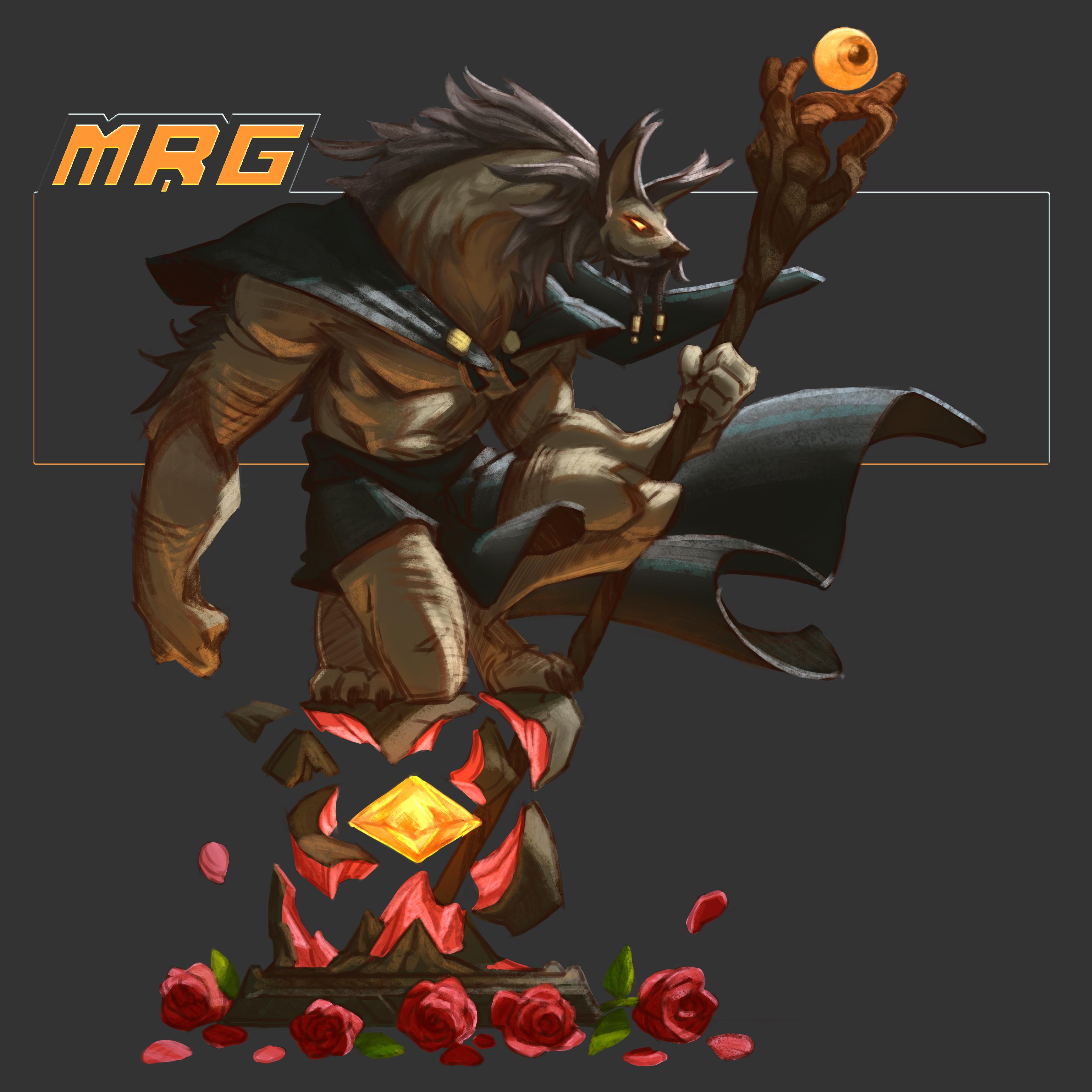 Hey everybody! Malcolm Rose here. You might know me from my Youtube channel where lately I've been posting my 37 win streak - the current second longest (or longest, depending on how you measure) streak in DCSS history. After I recently suggested on Reddit that Gnoll Wizard (GnWz) is the easiest and best caster combination in the game, I was asked to write a character guide for the combo. Can do!

Before I get started, I want to get into what I mean by "best." I'm not suggesting that GnWz will end up as the most "powerful" or "highest spell-power" caster in the endgame - that dubious honor would probably go to deep elves on account of their intelligence. I am instead suggesting that GnWz is the most "well-rounded" of pure casters. The unique properties of the gnoll race allow this combo to easily thrive at every point of the game with much less of a chance to screw things up than you would have on any other species.

Gnolls work like this: you have enormously huge aptitudes across the board, but are unable to manually train skills. Instead, you always train all your skills at the same time. This eliminates the skilling minigame, which is a sticking point for many new players. It's very possible for you to be playing perfectly well in the early game, except you made a mistake with your skilling. This is bad enough when you change weapons when you shouldn't have, but for a caster it can be doubly deadly; after all, being able to cast your spells requires the appropriate amount of training. Playing a gnoll takes this burden out of your hands and, in my opinion, gives a newer player the ability to play a caster start with the help of a set of training wheels.

Because of the nature of gnolls' skills, their "book starts" begin with an enormous amount of skill in their chosen field. In fact, this was considered too powerful at first, and this is why gnolls now have a full +8 aptitude in martial skills but only +6 aptitude in the various spell schools. The effect is still present, though, and the end result is that any gnoll who starts with a book is very unlikely to fail any of his spellcasts on D:1. Since the early game is the most dangerous part of the game, this is very, very good. A gnoll wizard can even handle a D:1 adder if he has to - chances are good his magic darts aren't going to miscast, and his spellpower is going to be enormous! "Wizard" compounds this strength even more because it begins with the most intelligence out of any background.

Gnolls do have weaknesses. Remember, you are training every single skill at the same time. Your aptitudes are huge, but the higher your skills get, the more experience it takes to raise them. Ordinarily this means that you sort of "peak" about the time that you'd be able to cast sixth or maybe seventh level spells. Sure, you could theoretically take the time to painstakingly scum up a lot more experience, but nobody wants to do that. Instead, the best thing to do is to use your god choice to shore up this weakness and, by the endgame, be able to cast any ninth level spell you want. Really!

Thus, this guide is going to assume you are worshiping Ashenzari. At first glance this seems like a controversial pick for the "best" anything because many people consider Ashenzari a pretty boring, or even weak god. There are certainly other paths you can go on a GnWz - basically any god is doable, in fact - but Ashenzari is going to let you do some pretty fun and amazing things. In any event, since your early game is so easy, you should have the luxury of picking whatever god you want. Take your time and pick up Ashenzari when you find the altar, even if it's a bit late.

Your early game looks pretty much identical to any other wizard. You're a squishy caster, and you're probably going to be in robes for a long time. This means that you're fragile and you are going to be using a lot of positioning tricks, stair dancing, etc. to throw spells at enemies without getting hit yourself. Details on these strategies are outside the scope of this guide - see my videos for information on that.

Now, as a gnoll you might think that you can branch out into being a tanky hybrid or even a warrior, but trust me: you don't want to do this. Gnolls are primarily casters, and as a gnoll wizard you want to leverage that big brain you started with (and keep building it up by always picking "intelligence" upon leveling).

However, being a gnoll does make you a little less fragile than other casters. You are always training defenses, so your dodging will be okay. You are always training armor, so if you end up wearing a light dragon armor such as steam, fire, ice, or (ideally) pearl, you'll get some extra mileage out of it. Perhaps most importantly, you will always be training shields. Shields are really good on any character, but especially low AC one. Always wear the biggest shield you can without penalty - that's a buckler at 4 points, and a generic "shield" at 15. If you're lucky, you'll find a buckler early on.

As you level up in the early game, memorize most if not all of your starting spells:

These spells are good enough that you should be able to survive all the way to the end of Lair on your starting book alone - longer if you have to. By that time, you should have have found some new character options. This might come in the form of books, weapons (especially ranged weapons), whatever. The joy of being a gnoll is that, to varying degrees, you can use almost anything you find. The game has to work very hard to screw over a gnoll on items. Books, however, are the ideal find on this character. You want to be on the lookout for book shops; if you're lucky, there might be one in the guaranteed four shops at the bottom of the Orc Mines. If you're really lucky, though, you'll find an extra book or two before the Lair. In the video series I linked above, I found Lightning Spire early on - used properly, that's a good enough spell to virtually win the game alone!

I'll leave it to you to look up other good spells, and in fact I think that's part of the exercise of playing a gnoll wizard. A newer player can get a chance to playtest any spell they come across and figure out for themselves how it works and what it is best for and, most importantly, if it's worth using at all on a particular character.

The way Ashenzari works is that you can use a "remove curse" scroll to curse your own items. Doing so gives you various skill boosts. This benefit is, as you can imagine, an enormous boon to any caster but is particularly powerful on gnolls due to their inability to easily get to high skill levels. The more piety you have and the more cursed items you are wearing, the more benefits you will see from this. Jewelry slots (rings and amulets) are what determine the benefits to your casting skills. Thus, you want to curse your rings and amulet as soon as possible even if they are sort of sub-par. For me, I'd probably even keep wearing a "cursed ring of loudness" solely for the skill bonus unless something much better came along - this saves a remove curse scroll, after all!

Speaking of these scrolls, you may find that they are in short supply during the early game. Just remember that, for this character, doing anything beyond cursing your ring and amulet slots is a luxury. You should consider keeping your weapon slot uncursed for awhile unless you find a particularly good one - this way you can take full advantage of swapping. If you find a staff of wizardry, however, I suggest you curse this immediately. These staves (along with staves of energy and power) will give you an enormous "spellcasting" boost if you are cursed and worshiping Ashenzari.

In the mid and late game you will keep using the best spells you can find. Casters really start to shine here because magic is so powerful in DCSS, and as a gnoll you're unlikely to run into any spells that you can't cast. You should be using all the "wizardry" items you come across - by the end of the game, a fully cursed Gnoll Wizard with two rings of wizardry and a staff of wizardry should be able to cast any ninth level spell he wants. This doesn't mean that you have to find piles of "wizardry" items, however, to have a good game. Even your most basic gnoll is probably going to be able to get to level 6 spells, and level 6 spells are plenty powerful to win the game. Remember: iron shot is level 6 and it kills orbs of fire. With that said, be particularly on the lookout for summon and necromancy spells - these schools have always been fairly overpowered and it doesn't look like that's going to change anytime soon.

Playing a gnoll allows you to do everything, and worshiping Ashenzari gives you even more leeway. Do not be afraid to use any and everything you come across. While a GnWz is usually going to be most powerful when played as a pure caster, this obviously isn't the case if you find something ludicrously strong such as Sharnga, the +8 speed longbow. All in all, keep an open mind and continue to play carefully; you have average hit points and are wearing light armor, so you will always be a bit bad at taking hits.

Enjoy my writing? I wrote a fantasy novel as well! If you want to support me and encourage more guides like this, buying it would be a wonderful way.

Also, take a look at Rose Crypto, my website where I discuss cryptocurrencies such as Bitcoin and more. My philosophy is that you shouldn't have to be a highly tech-savvy person to learn about how this technology is changing the world of money. My goal is to take all the tech buzzwords away and educate people on crypto in plain English. After all, Bitcoin has made millionaires out of many people overnight - wouldn't you like to learn how it works, and how to get some for yourself?